3D printing and motor sport are a match made in heaven. Teams from all over the world are turning to additive manufacturing to realise cost and time savings. Using the time that is saved with 3D printers, teams can spend longer optimising their cars to gain an edge over their competition.

At the highest level of the sport, McLaren has been using Stratasys FDM and Polyjet machines to produce parts for its race car, as well as tools to speed up production. 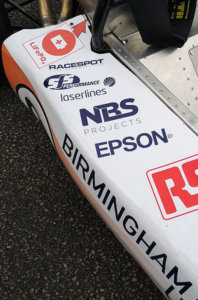 We wanted to introduce some of those benefits a bit further down the motor sport chain. As the UK’s leading seller and supporter of 3D printers for over 25 years, we wanted to find a nearby racing team and offer our support with their efforts.

So it was that we came to be a sponsor for BCU Racing, which competes in Formula Student. This is Europe’s most established educational engineering competition, which recently celebrated its 20th anniversary. Backed by high-profile engineers such as Patron and Ross Brawn OBE, the competition aims to encourage more young people to take up a career in engineering.

Each of the 80 teams has to design and manufacture their own open-wheel race car, which they then race at Silverstone. It helps engineering students make the move from university to the workplace by giving them practical experience along with extra skills such as project management and business planning.

Run by Birmingham City University students who share a love of engineering and sport, BCU Racing’s motto is that ‘intelligent and competent design is not dependent on budget.’ This is the ninth year that BCU Racing has taken part in Formula Student, and this year the team beat its nearby rivals to become the top team in the West Midlands, competing in areas such as sprint and endurance.

As civil engineering student at Birmingham City University, Supreet Johal, says, the project “is about more than designing a car, it’s about working together with students from different disciplines that have a shared goal.”

Congratulations to the BCU Racing team for a successful racing season and we wish you even more success in 2020!

If you would like to find out how 3D printing can save you time and money, call Laser Lines on 01295 672599 or email 3dworld@laserlines.co.uk