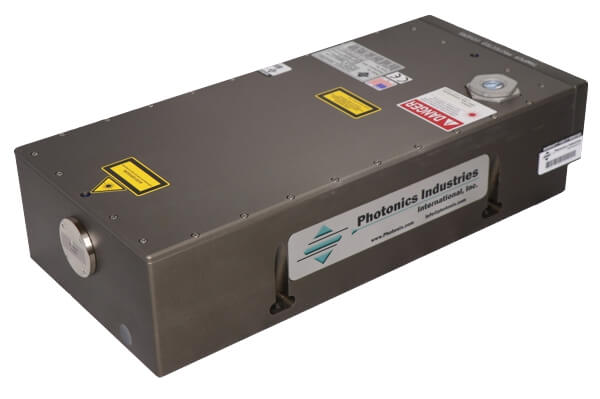 Photonics Industries’ DX Series Green Laser (in the Green at 532nm), has the shortest pulse width (<30ns @400kHz) in its class.  The Green Laser also offers the highest output power (30W, 50W, 65W and 100W) and widest rep rate at up to 900kHz. Reaching new levels, this DPSS laser has the highest wall plug efficiency available (~17% for green).

Common to both the UV and Green lasers are that they are from ~20% to 50% more efficient – depending on the specific models compared – and are more “carbon neutral” for greener manufacturing.  The lasers come in a small lightweight package.  A monolithic All-In-One (AIO) design with no need for a separate utility module, PI lasers have a total volume of ~1/4th that of their closest competitors.

This website uses cookies to improve your experience while you navigate through the website. Out of these, the cookies that are categorized as necessary are stored on your browser as they are essential for the working of basic functionalities of the website. We also use third-party cookies that help us analyze and understand how you use this website. These cookies will be stored in your browser only with your consent. You also have the option to opt-out of these cookies. But opting out of some of these cookies may affect your browsing experience.
Necessary Always Enabled
Necessary cookies are absolutely essential for the website to function properly. This category only includes cookies that ensures basic functionalities and security features of the website. These cookies do not store any personal information.
Non-necessary
Any cookies that may not be particularly necessary for the website to function and is used specifically to collect user personal data via analytics, ads, other embedded contents are termed as non-necessary cookies. It is mandatory to procure user consent prior to running these cookies on your website.
SAVE & ACCEPT